Mutilated by Zombies - Scripts of Anguish

by Mutilated By Zombies 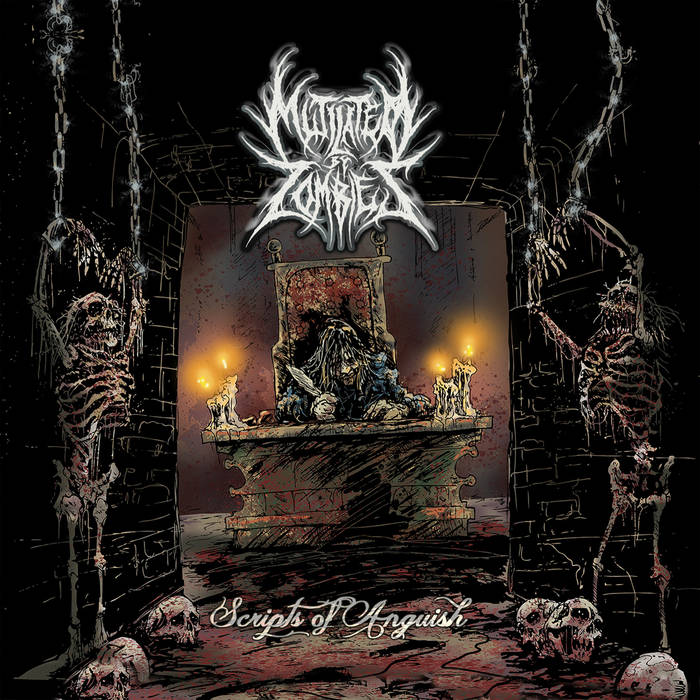 lowpassportion I usually don't even like low growls that much, but this record is something else. The guitars sound great. The album flows really well and all the songs are easily distinguishable. Easily one of the best albums of the year. Favorite track: Dismissed.

Matthew Toye While I enjoy bands that are reimagining the genre, sometimes you just need a taste of that morbid old school death metal sound. Mutilated By Zombies easily scratches that itch with their gimmick free debut. Favorite track: Instructions for Death.

Metallurgical Fire This is a very solid album. It’s a grower with a meatier second half. I was actually surprised by the vocals because they are pretty understandable for death metal, and although there is obvious emphasis on some grotesque stuff the lyrics are well written and flow well. It’s probably the thing that stands out most on the record. There are plenty of banger tracks but Insanity’s Grasp slays everything. Favorite track: Insanity's Grasp.

tank_06 I got this album as soon as it dropped without knowing anything about it...mainly because I thought the cover and the band logo were dope. Had to work all thru the long weekend and rocked out to this shit most of the time. Great album! I can put it on and leave it...whole thing is fuckin solid. I love the dual vocals going on, mixing the growls and screams, and the guitar work is amazing. Sound quality really impressed me too... I was hearing it thru a shitty little bluetooth speaker mostly, then heard the first few tracks again on my good headphones at home, and holy shit it was even better! That bass...god damn yo. I recommend checking these guys out.
-Jeff Favorite track: Decayed Manifestation.

DJL68 Vicious as hell, concise in delivery. One of the very best death metal albums I've run across this year. Favorite track: Gored.

jstpierre Good blend of Progressive and straight up Death Metal. The high-pitched vocals and growls complement well one another. We can hear the bass throughout: I only wish more bands would do this...

"..speaking for myself at the very least, it's incredibly difficult not to headbang the ever-loving shit out of this track."
- Metal Injection
www.metalinjection.net/video/mutilated-by-zombies-offer-relentless-death-metal-with-new-track-instructions-for-death

"Midwest death metal act Mutilated by Zombies were brought into existence a decade ago to write and play death metal reminiscent of its golden age, which, in this case, seems to be old-school Florida-style death metal, citing Deicide, Monstrosity, Gorguts and Cryptopsy as some of their major influences. The trio succeed in their mission, crafting meat-and-potatoes death metal. There are no frills, no acoustic interludes or ambient introductions; starting with “Decayed Manifestation” and ending with “Rise to Enslave,” Mutilated by Zombies focus on meaty riffs, growled vocals and a machine-like rhythm section.
Mutilated by Zombies don’t reinvent the wheel, nor do they want to; the gore-obsessed crew do an above-average job at dealing angular riffs, deep vocals and blasting at high speeds."
- Decibel Magazine
www.decibelmagazine.com/2018/10/04/full-album-stream-mutilated-by-zombies-scripts-of-anguish/

“ ....Mutilated By Zombies, carves out their own niche among bands like Dying Fetus, Deeds Of Flesh and Cryptopsy. This is pretty pummeling and soaked in gore worship and my one complaint would be that the overall production comes across as a little flat. Angular riffs, growled vocals that give way to screams keep the songwriting fresh, though, and lend to the whole thing coming across as one complete package. “
- Decibel Magazine, For Those About to Squawk
www.decibelmagazine.com/2018/09/28/for-those-about-to-squawk-author-punisher-deadbird-mutilated-by-zombies/

" ..in a world where the influences of Entombed and Dismember dominate, it's exciting to see someone focusing on what the label bills as "Traditional Death Metal". There are sharp angular riffs here and a remarkably full sound given that the band is only a three piece. The punishing assault and twisted burning wreckage of a sound that they have unveiled is mesmerizing to say the least. You find yourself getting pulled into these grandiose and overarching riffs that come screaming for vengeance
Surfacing from the grave, Mutilated By Zombies was created to deliver Death Metal reminiscent of it's Golden Age. Consisting of vocalist/guitarist Josh DeMuth, bassist Jason Guler, and drummer Greg Mueller, this Iowa three piece will bring US death metal back to the forefront with the release of their new album, Scripts of Anguish."
- Two Guys Metal Reviews
www.twoguysmetalreviews.com/2018/08/mutilated-by-zombies-scripts-of-anguish.html

"Messier than a six-year-old hopped up on Capri Sun and meaner than your local DMV representative, their third album Scripts of Anguish will take whatever petty emotion you happen to be feeling and make tapioca out of it (and your functioning grey matter). I hope you like it chunky."
- Angry Metal Guy
www.angrymetalguy.com/mutilated-by-zombies-scripts-of-anguish-review/

" Mutilated By Zombies assembles into a vicious corpse-grinding, war machine and rumbles forth, ready to devour you and anyone else unwise enough to get in its way...."Scripts of Anguish"'s tale of death and sorrow is almost theatrical in its delivery; a play with the world's most violent orchestra pit."
- Metal Temple
9/10
www.metal-temple.com/site/catalogues/entry/reviews/cd_3/m_2/mutilated-by-zombies.htm

""Awesome old school death metal, though of a different sort than you might be thinking. This one should appeal more to the Morrisound, Florida death metal devotees of the world, offering that early Deicide viciousness with the rhythmic chops of prime Dying Fetus and Deeds of Flesh."
- Sludgelord
thesludgelord.blogspot.com/2018/08/sludgecamp-5-deep-dive-into-newest.html

“Punishing, assaulted, twisted and surfacing from the nightmarish graves, this album finds the listener being pulled into a Golden Age modern day sounding of death metal. Musically, lyrically and progressively speaking, Mutilated By Zombies combined the best elements of early Cryptopsy, Gorguts, Monstrosity, Dying Fetus, and Deicide, to create a ferocious sound all their own.”
- Metal Purgatory Media
metalpurgatorymedia.wordpress.com/2018/10/01/mutilated-by-zombies-scripts-of-anguish/

" Mutilated By Zombies is a delightful throwback to good ‘ol gore - soaked death metal, and that’s absolutely nothing to complain about… and absolutely worth checking out. Rating: 4/5"
- Death Comes Lifting
www.deathcomeslifting.com/mutilated-by-zombies-review

"Death metal trio from Dubuque, Iowa, U.S.A. Mutilated By Zombies is not another old school band trying to copy the Scandinavian 90s sound though. No, they are more influenced by CANNIBAL CORPSE, DEICIDE, MONSTROSITY and early CRYPTOPSY instead. So if that's something that makes you hungry, then I think you know what to do next.
10 tracks is what we get here. And they are not always that fast. There's also some heavier parts here and there. It's simply a good mixture of both."
- HardRockInfo
www.hardrockinfo.com/reviews/2018/6.html#mutilated_by_zombies-scripts_of_anguish

"...the entire work of Mutilated by Zombies is a real tribute to the Death of the 90's. They seem to take a cue from the first Deicide and, in the most technical moments, from the Canadians Cryptopsy, while not missing episodes to moments in which the band seems to try to make the verse to Gorguts or Death"
- All Around Metal (IT)
www.allaroundmetal.com/info#

Having independently releasing 2 full lengths and an EP, the band have grown exponentially with their latest offering. Mutilated by Zombies combine the best elements of early Cryptopsy, Gorguts, Monstrosity, Dying Fetus, and Deicide, to create a ferocious sound all their own. The riffs are fast, furious, and devastating while the songs themselves are ever-evolving and unrelenting.

Drums and vocals recorded by Luke Tweedy at Flack Black Studios in Iowa City, IA.
Guitars recorded by Clint Benson at BenSin Studios in Dubuque, IA.
Bass recorded by Jason Guler
Mixed and mastered by Zack Ohren at Castle Ultimate Studios
Art by Karl Dahmer at Dahmer Art
Logo by Maxwell Aston Art
Layout by
Guest vocals on "Rise To Enslave" by Cameron Argon
All music and lyrics written by Mutilated By Zombies

Bandcamp Daily  your guide to the world of Bandcamp